Drive to Apple Store to test the iPad Pro 10.5 today. I was planned to buy a Magic Touchpad 2 from Apple store, but it’s out of stock 🙂

I just got my new iMac middle 2017, so I don’t need to test that out in Apple Store. The iPad pro 10.5 brings my attention because couple of podcasts The Talk Show, ATP, Connected, Under the Radar and Upgrade. They all mentioned the iPad pro’s promotion (I mean “Pro Motion”), which is like retina for animation. That sounds really interesting. It’s not a easy engineering topic, and seems apple did it and make it seems “easy”.

I just did like 10 minutes of test in the apple store with a lots of kids enjoying their summer vocation. Here is what I found:

OK, then it’s obviously you are facing a “bankruptcy”! Wow, that’s sad, frustrated, ruin your tomorrow!

Then, stick with it. Live with imperfections, and live with your frustration of coming bankruptcy. Keep reasoning on “what’s the meaning of life, in the context of yourself (including what you love, a.k.a. family)”. That’s the only tunnel to get yourself out of “I’m fucking busy”.

I love the quote “Break the cycle Morty, rise above, focus on science”

Tomorrow will normally come until your last day 🙂 Keep going and break the loop of “being busy without meaning”.

I frequently having problems having conversation with some individuals. Because someone prefer frequent none-value-driven argument, someone prefer complains all the time, someone are neglect diversity of opinions. It’s a frustration! And the expression I put here is negative, which is affect by my bias and emotional feelings.

If I fight back, and use the same techniques to drop my frustration bomb, then the conversation won’t have a happy ending. So, just slow it down a little bit. Deep breath, and let the negative feeling go away.

Spotify is my first music streaming service, and I love it’s social feature back to 5 years ago. I was in China back then, and I need to use VPN to access Spotify. I remember it had no free-tier at that time, but paying $4.99 is already affordable.

At 2014, I start using Rdio. And it’s great, from any perspective. I sticked to it’s web tier for a while. And good friend who worked in Rdio invited me to his “family”, and then I can use Rdio’s premium service for free. That last another year. After that I continue my Rdio subscription and using the $9.99 tier because it supports me using the offline feature for my wife.

And then Apple Music debuts. I remember it has long trial, and then I switch to apple music so my wife can use the Rdio subscription on her phone. She start using Rdio frequently, and I was always kicking off while listening.

Apple Music is not great, quite disappointed. Rdio close it’s door at end of 2015. Then I start a premium-trial (3 months, it’s very generous) on Spotify again, I registered a new US account. Actually I’m not very happy about Spotify, but after losing Rdio I have not much choice. Because my wife switched to Spotify after Rdio died too. So I was kicked off from Spotify frequently then. The alternative I found is getting a subscription in apple music China, it’s cheaper ¥9.99/mo. And the Apple Music China have good availability of Mandarin pops, which my wife and me enjoy sometime. This is not a very satisfied state, we are OK with the service, but have no love for long relationship.

I bought an Echo not long after it’s debut. And Echo is pretty interesting device. My daughter really love teasing it, and keep calling it “Alexia” which Alexa don’t understand. But Echo is very very dumb working with Prime Music. Because Prime Music ask user adding playlist to their library before they can play them. So you need to remember the playlist’s name, which is a hard work. The result is awkward, I have very narrow selection of playlist, and Echo have hard time to satisfied the family’s music need. We do use Echo integration with Spotify sometimes, but it’s just like a network speaker, it doesn’t smart enough to have conversation with human. So the integration is kind of useless.

Amazon released Prime Streaming Music couple of days ago. It’s only $3.99/mo for Prime customer who own an Echo. And then I start the trial. And then I can tell that my daughters love it. My elder daughter will tell Alex “Play elmo song from Sesame street”, and then they will start squiggly and laughing. And I can tell Alex playing music by artist name, which is more natural than telling it a accurate playlist name which is in my library.

So I cancel my Spotify Premium again. And I don’t think I will look back. “I switch to some other streaming platform” is not even an reason to leave Spotify, it’s asking this question when you cancel your subscription. I think that’s funny. When the wave of smart device coming to home, Spotify should show a more aggressive attitude on integration. But maybe that’s not a choice for Spotify, they don’t have a choice.

BTW, after iOS 10 upgrade. The apple music China’s subscription become awkward. Because you can’t login to Apple Music from different account than your primary iCloud account. Apple’s policy on cloud integration is stupid, it’s own implementation suck and it’s not open for other player. This locked a device to use same iCloud account for all. And then I start using Apple Music on an android device, which is funny. But that music streaming device is optional. I use iTunes on my Mac which still allow different apple store account.

There’s a bigger problem sitting behind all of this. Premium hardware manufacture want to control the eco-system, which is a software/developer platform. Amazon is leading the home smart assistant market, google is joining the game by google home. Apple’s siri is dumb, otherwise it should work with Sonos and creating a smart home assistant already. Spotify is an embarrassing, it’s a developer and have multiple platforms to support. And Spotify has an mediocre user experience, I think they know but can’t change the status quo. So I think Spotify may lost it’s leading position in next 5 years. Google Music becomes interesting here. Because any rich company can join the game and throw money into this money pit. Music label will get more revenue they lost from pirate copies. I think Music label will issue more contract with those rich company then, exclusive contract will be rarer. But how to make your music playlist portable is a headache. Cloud data portability is only based on good will, not shared interests.  And user will suffer from this if they are early adopter and willing to move (which is complex and time-expensive).

There’s 1 solution. Build some playlist in your head. And bet on AI based human-computer conversation interface. So you can bring your favorites to anywhere. Or maybe build a software which speaks your playlist out to Echo/Google home. That’s a dumb idea :-). Let’s see, I already pre-ordered google home. And I’m looking for more premium experience from google, like what they did in Pixel phone. But Amazon play the game differently, they bundle more and more values into their prime account which sticks user very well. I’m sure some user prefer quality first, others cares value/price ratio. I want to see how much quality difference between them, and then I will buy my music streaming service on that platform.

This “bug” bother me frequently, and I don’t know why? I didn’t thought that’s related to connecting more than 1 external monitors, so I always search for “kernel_task high cpu”, which leads to similar fix than what I found lately.

So there’s some falty kernel extension which trick the kernel_task, and kernel_task try to steal CPU time to cool CPU down. Which make the system very un-responsive. This issue normally took couple of hours of my time, I can’t get back to productivity.

I thought those 3 things may fix it:

But those method is like Voodoo 🙂 I even tweeted SMC reset fix my problem, but it turns out not true.

So I change my google keyword, and find the better answer immediately.

Those article actually is mostly overlap with How to fix kernel_task CPU usage on El Capitan. The difference is it tells you that you need to “poke each of the kext to figure out which one is the lemon”. This make it more like a science 🙂

Mac have serious software quality issue. But their intention is good, you can seamlessly upgrade from major OS versions. It doesn’t bother about “Drivers update” like windows (although windows 10 addressed the driver issues pretty much already). But it doesn’t mean you will load wrong thing into your kernel extension which ultimately cause weird issue. Apple also have bad knowledge base, you can’t find anything useful on their “wiki”. But noise in user forum, and Apple so very bad at indexing them.

OK, rant finish. To me this is what I learned:

And how to fix this issue on your macbook?

Finally, I need to say OS X breaks so often recently. And maybe I should say it never works correctly, it almost always accidentally barely works. Those components breaks for me frequently: 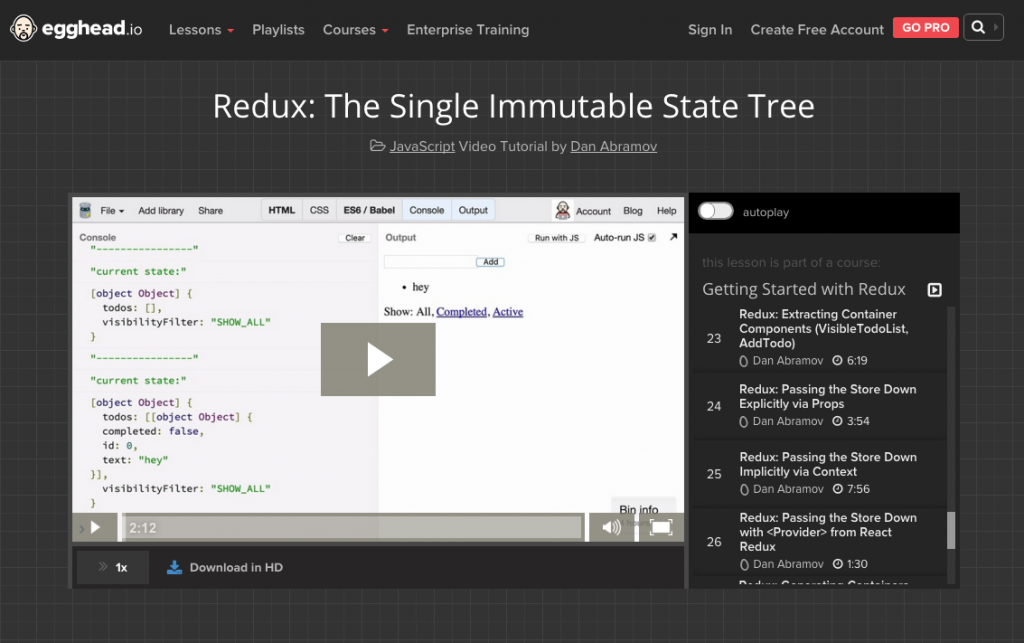 It includes 30 short video lessons, which are great example of Refactoring to Patterns. Although there’s not a goal to form any patterns. The goal is just making sense in coding. The process of refactoring make me feel exciting. Nowdays the javascript community is full a micro-libraries, like the react-redux. This video actually shows the intention of refactoring and extract reuseful code as tiny library.

Thanks Dan and egghead.io!